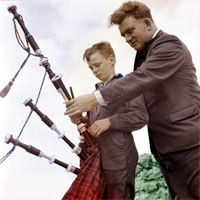 The Great Highland Bagpipes are a powerful and evocative instrument. Although there are only nine notes, the amount of music written for it is staggering.  If you are interested in learning to play the bagpipes, the first thing you need to know is that you don't need a set of bagpipes. Do not rush out and buy a set of bagpipes. We will begin discussing your instrument purchase 6-8 months into your lessons.  There are a lot of bad bagpipes on the market and I've seen a lot of people buy useless instruments. So what do you need?

To begin learning to play the Great Highland Bagpipes you will need:

Later, we will also use The College of Piping Essential Tunes for the Piper (Volumes 1 and 2) for supplementary material.

If you are ready to schedule your lesson, please contact Dr. Berlin. There is a VERY limited amount of openings each new term, so don’t delay.

To the make of a piper (excerpt)
by Neil Munro

To the make of a piper go seven years of his own learning,
and seven generations before.
At the end of his seven years
one born to it will stand at the start of knowledge,
and leaning a fond ear to the drone
he may have parley with old folks of old affairs.

In Memory of My Teacher 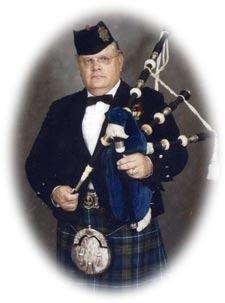 Pipe Major William T. Robertson III was born and raised in Indianapolis, Indiana. He taught for twenty-seven years in the Houston Independent School District.  On May 8, 2007, Robbie passed away.

Robbie started his piping career in 1954 under the tutelage of his father.  His first band experience was a D.A.V. sponsored Boy Scout band in Indianapolis.  He played in this band until the Spring of 1957, when he "put away" the pipes for six years. In the Spring of 1963, he once again took up the pipes, under the tutelage of Don Maitland and started playing with the Gordon Pipers of Indianapolis, and later was one of the founding members of the Indiana Scottish Pipe band of Indianapolis, playing with both bands until his entry into the U.S. Air Force in 1966.

While stationed at Chanute AFB, Illinois, he played with the Peoria Pipe Band of Peoria, Illinois, under Pipe Major Phil Eskew. His Air Force assignment took him to Vietnam in October of 1966 where he was attached to the 1st Air Cavalry Division at An Khe.  The pipes soon followed and, by Christmas of 1966, "Robbie" was keeping alive the tradition of pipers in Combat. Upon his return stateside, he was assigned to Kelley AFB, in San Antonio, Texas, and was asked by locals to help in the formation of a pipe band there.  The result became the Alamo City Highlanders, and its 3 "children" -- the San Antonio Pipes & Drums, the Black Bexar Pipe Band, and the Alzafar Shrine Highlanders.

Upon his discharge from the Air Force and subsequent marriage, he moved to Tampa, Florida, and played with the Bay Area Pipes and Drums and the Egypt Temple Shrine Highlanders. Returning to Texas in 1971, he played with the Houston Highlanders for a year before returning to San Antonio and the Alamo City Highlanders.In 1979 due to job changes, he returned to Houston and the Highlanders.  In 1983 he was asked to assist in forming a pipe band for the Arabia Shrine Temple and continued as Pipe Major until the dissolution of that band in 1995.